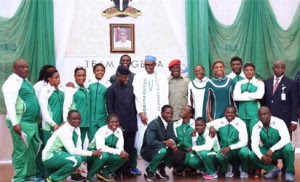 Condemnations have continued to trail
the delay by the Nigerian authorities in
releasing funds to the country's
contigents, billed to participate in the
2016 Rio Olympics, holding in Brazil
between August 5-21, 2016.
Some Nigerian athletes billed to
participate in track and field events at
the Olympics, on Friday, took to various
social media platforms and online
crowd-sourced funding platforms to
solicit for funds to fly them to the
competition.
Some of the athletes who could not hide
the shame of missing out in the
competition, after about four years of
preparation, owing to delay in releasing
funds for them, begged well-meaning
Nigerians to come to their rescue.
The athletes were American-born
Nigerian sprinter, Regina George;
Nigeria's fastest man and 100m
Champion, Seye Ogunlewe jnr.
George specialises in the 400metres. She
represented Nigeria at the 2012 Summer
Olympics and was the silver medalist at
the African Championships in 2012.
George who tweets via
@DivaOnTheTrack took her request of
$4,000 to a crowd-sourced funding
platform, gofundme.com.
She wrote: "To all my family friends and
fans thanks for being here for me
through the good times and bad times.
This year it's been hard financially for
me but it wouldn't have been possible
without your support.
"I just been told that we will have to pay
our own way to the Olympics this year.
Sadly this is such short notice for me to
come up with the money.
"They (Sports authorities) also promised
a refund but I'm still waiting for many
refunds promised in the past. I been
through a lot of obstacles this year and
through it all I made my SECOND
Olympic team. I don't want to stop now
after I earned a spot to represent my
country (Nigeria) in the Olympics. Any
donation will help my situation. This will
not go unnoticed and I'm truly grateful
for my supporters."
At the time of filing this report, George
had gotten about $640 from spirited
donors.
On his part, Ogunlewe who tweets via
@seyeogunlewe said: "Just so every one
knows. We all got that message saying
we should get our own tickets to Rio,
#helpnigerianathletes."
It would be recalled that President
Muhammadu Buhari, had last Tuesday,
while hosting the Olympics contigents in
Aso Villa, assured that his administration
would ensure that the fund budgeted for
the Rio Olympics is released without
further delay.
Vanguard could not ascertain if the said
fund has been released as at the time of
filing this report.

at 00:28
Email ThisBlogThis!Share to TwitterShare to FacebookShare to Pinterest