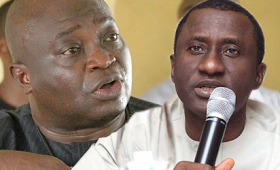 The Abia State chapter of the Peoples
Democratic Party (PDP) has alleged that the
certificate of return given to Dr Uche Ogah
by the South East Commissioner of
Independent National Electoral Commission
(INEC), Lawrence Nwuruku, is fake.
Speaking with newsmen in Umuahia while
displaying the two certificates of return
given to both Ogah and Governor Okezie
Ikpeazu, the publicity secretary of Abia PDP,
Chief Don Ubani, said that the certificate in
Ogah's possession is a mark of desperation
and illegality.
Ubani said the certificate of return given to
Ikpeazu has two dates on which the
governorship elections were held, which
were 11th and 25th of April 2015, for both
the main election and the supplementary,
while Ogah's has only the 11th April, 2015
date, being the one for the main election.
He said the difference in the dates resulted
from the fact that on the day of the main
election, no one emerged as the governor,
which led to a supplementary election being
held on the 25th, which produced Ikpeazu as
the governor.
The former information commissioner of the
state alleged that Ogah's desperation to
become governor through illegal means led
to INEC making mistakes.
"They also went ahead to order his
immediate swearing-in which has caused a
lot of trouble in the state," he said.
Ubani said that Ogah never campaigned or
participated in any phase of the election
proper.
"We as a party in the state hold strongly
against the intention of INEC and Dr. Ogah
to misinform the people about Ikpeazu,
which is baseless," he said.
Ubani added: "It is a known fact that
Ikpeazu has been a civil servant as the
General Manager of Abia State Passenger
Integrated Manifest/Safety Scheme and the
immediate past Deputy General Manager of
Abia State Environmental Sanitation
Authority in charge of Aba zone."
"By virtue of being a civil servant, his tax
was deducted at source. Therefore, those
saying that he did not pay his tax were
either being funny or they are being out of
tune with the realities on ground concerning
tax issues.
"This is a question of conspiracy, which can
only do one thing, which is distraction, as
INEC was just being mischievous by
declaring election inconclusive for a
supplementary election to be held on the
25th of April, which produced Ikpeazu as the
governor".
Ubani noted that the Federal High Court
Owerri had vindicated the governor on the
authenticity of his tax certificate as a public
servant as well as declared him as the duly
elected Governor of Abia State.
He insisted that alleged misinformation on
the tax documents presented by the governor
is baseless.
Ogah's spokesman, Emma Iheanacho,
however, described the allegation as
baseless and senseless, adding: It is a cry of
a people that have fallen and doing every
thing possible to rubbish the good image of
another person. How can any right thinking
person say that the certificate issued by
INEC on the instructions of a competent
court in the land is fake?That tells you that
they have lost it all. They can never bring
down Ogah."
Also reacting to the allegation, Ogah's legal
officer, Monday Onyekachi Ubani said: "It is
laughable because INEC has disassociated
itself from that fake news circulating in the
social media as no hard core news media
have carried the baseless rumor. INEC has
threatened legal action against any media
platform or individuals championing such
malicious story without facts.
"The falsehood peddlers will have to produce
that INEC Source to prove their case, stating
that such baseless falsehood peddled on a
social media by the camp of Dr Okezie
Ikpeazu makes a mockery of the group and
their candidate.Dr. Uche Ogah remains the
authentic bearer of the Original INEC
Certificate of Return as the one issued to Dr
Okezie Ikpeazu is deemed cancelled in law.
"It is advised that it is high time Dr Okezie
Ikpeazu vacate the governorship seat
honorably and stop the childish hiring of all
manner of charlatans who are financially
induced to pay fake solidarity visits.
Faceless groups with their solidarity visits
based on financial inducement cannot
change the eight lies of Dr Okezie Ikpeazu
that are already before the court of law."e

at 00:42
Email ThisBlogThis!Share to TwitterShare to FacebookShare to Pinterest