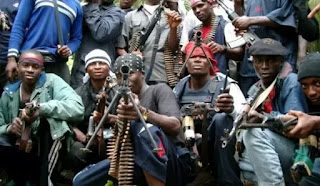 Niger Delta Avengers on Sunday night
allegedly blew up the Nigeria National
Petroleum Corporation, NNPC, gas
pipeline at Nsite Ibom Local Government
Area, Akwa Ibom State.
The claim has not been independently
confirmed, but spokesperson of the
militant group, self-styled Brig Gen
Mudoch Agbinibo, in a statement,
challenged NNPC to "check their pipeline
if it is 'system anomaly.' "
The statement read: "At 11:30pm on
Sunday, the NDA blow up Nigerian
National Petroleum Corporation
(NNPC), gas pipeline at Nsit-Ibom L.G.A,
Akwa Ibom state. NNPC should check
their pipeline if it's "system Anomaly".
Asking the NNPC to check if it was
system anomaly is an allusion to the
exchange between the militant group and
Exxon Mobil, which initially denied an
attack on its export line in Akwa-Ibom
state, saying that it was a system
anomaly, only to declare force majeure
days later.

at 06:21
Email ThisBlogThis!Share to TwitterShare to FacebookShare to Pinterest