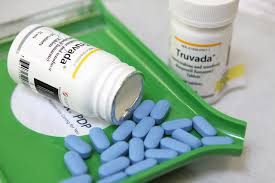 The first drug designed to help to prevent
HIV transmission in people at high risk of
infection was approved for use in the
European Union on Friday.
The European Medicines Agency (EMA)
approved the use of the drug Truvada for
pre-exposure prophylaxis, or PrEP, in
combination with safer sex practices.
The London based agency said that PrEP is
recommended by the World Health
Organisation (WHO). "The drug will help
people who do not have HIV but who are at
high risk of infection with HIV to lower their
chances of becoming infected when they are
exposed to the virus. "The oral drug should
be used in combination with condoms as
part of an HIV prevention strategy.
"Truvada was previously approved for use in
the EU as part of drug cocktails designed to
treat people infected with HIV,'' the WHO
said. The WHO estimates that some 36.7
million people worldwide were living with
HIV at the end of 2015.

at 01:21
Email ThisBlogThis!Share to TwitterShare to FacebookShare to Pinterest