INEC office bombed in Rivers ahead of rerun 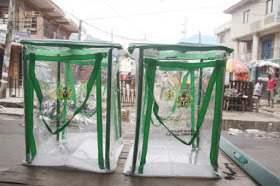 Barely a week to the July 30 inconclusive
rerun in Rivers State, the office of the
Independent National Electoral Commission
(INEC) was bombed yesterday in Bori-Ogoni,
the traditional headquarters of Ogoniland
and the seat of Khana Local Government
Area of the state.
Rivers Elected Councilors Forum in the 8th
Legislative Assembly, through its Secretary,
Ekine Nkrokeokia, accused desperate
politicians of being behind the arson, and
urging security agencies to ensure thorough
investigation.
The elected councilors described the
bombing of INEC office as very unfortunate,
condemnable, wicked and ungodly, while
accusing desperate politicians of trying to
create unnecessary tension and crisis in the
state, thereby preventing the election of
popular candidates.
Also speaking, the state Chairman of the
Peoples Democratic Party (PDP), Chief Felix
Obuah, through his Special Adviser on
Media, Jerry Needam, accused members of
the All Progresives Congress (APC) in the
state of bombing the INEC office in Bori, in
view of their unpreparedness for the polls.
But, the state Chairman of APC, Chief Davies
Ikanya, through the party's Publicity
Secretary, Chris Finebone, declared in a
telephone interview that Obuah, Needam and
other members of the PDP in the state
should be held responsible for the arson,
insisting that APC members were fully
prepared for the elections.
The rerun will hold in eight LGAs, spread
across the three senatorial districts of the
state.
Investigation yesterday in Port Harcourt
revealed that the INEC office was bombed in
the early hours of Friday by yet-to-be
identified persons.
The Rivers Police Public Relations Officer,
Nnamdi Omoni, a Deputy Superintendent of
Police (DSP), disclosed that investigation
into the incident had been ordered.
The PDP chairman claimed that bombing of
the INEC office was part of APC's plots to
ensure that the July 30 rerun was
postponed, alleging that the party (APC) was
not ready for the elections.
"It is another deliberate action by the APC to
create a state of insecurity, not only in
Khana LGA and the Ogoni area, but in Rivers
State as a whole, apparently to justify their
demand for the postponement of the
election, having realised that its candidates
in the election from the area will not
succeed in the poll.
Interestingly, Governor Nyesom Wike, while
addressing the party's supporters on
Thursday at the Rivers East senatorial
campaign rally at Okehi, Etche LGA of the
state, declared that anyone posted to Rivers
State, with the aim of rigging the elections,
should inform his family the location of his
hidden wealth, stating that the person would
face the treatment reserved for armed
robbers.
He accused the INEC Chairman, Prof.
Mahmud Yakubu, of concluding plans to
postpone the rerun, allegedly in deference to
the fear of defeat expressed by the
leadership of Rivers APC.
Rivers APC's Publicity Secretary, yesterday
in Port Harcourt, asked to stop threatening
everyone.
"The callous and mindless mudslinging by
Wike is true-to-type, especially when he
wants to stir the water muddy, in order to
create a smokescreen to perpetrate his evil
machinations. The potpourri of blackmail,
threats and empty bravado are all part of
his curious style of politics."

at 00:37
Email ThisBlogThis!Share to TwitterShare to FacebookShare to Pinterest