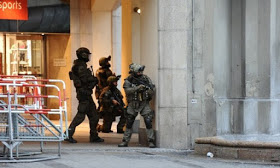 Nine people were killed and 16 wounded in a
shooting rampage at a Munich shopping
centre. Investigators found the body of the
suspected shooter, who appears to have
acted alone and then killed himself. Police
say the gunman was a German-Iranian 18-
year-old who was not previously known to
police.
Here is what we know:
– What happened? –
A shooter opened fire at a McDonald's
restaurant and continued onto a street
before entering the Olympia (OEZ) mall near
the Olympic stadium in Munich. The
shooting started shortly before 1600 GMT,
with authorities initially saying witnesses
reported seeing three gunmen. Police said
the man likely acted alone.
Nine people were killed in the shooting that
began early Friday evening, with 16 injured,
Munich police said on Twitter.
The authorities had earlier reported a higher
number of injured people. A video posted on
social media appeared to show a man
dressed in black walking away from the
McDonald's while firing repeatedly on people
as they fled.
Authorities evacuated the main train station
in the city of some 1.4 million, while metro
and bus transport services were suspended
in the wake of the assault, but have since
resumed. The shopping centre, which
opened in the 1970s and bills itself as
Bavaria's biggest, was surrounded by armed
police, while a helicopter buzzed overhead.
The Olympia mall is near the stadium for the
1972 Olympics and the athletes' village,
which was the site of the massacre of 11
Israeli athletes by the Palestinian Black
September group.
– Who was the gunman? –
Munich police said the shooter was a
German-Iranian 18-year-old from Munich
whose motive was "completely unclear".
"The perpetrator was an 18-year-old
German-Iranian from Munich," police chief
Hubertus Andrae told reporters after the
rampage.
The shooter had dual citizenship and "no
criminal record". "The motive or explanation
for this crime is completely unclear," he
added. A police spokesman had earlier told
AFP they suspected "terrorism" in the
rampage, while German news agency DPA
quoted police as warning of an "acute terror
situation".
Police initially believed there could be up to
three assailants. But Andrae later clarified
that two others who had been thought to be
linked had "absolutely nothing to do" with
the attack — and that they were simply
fleeing the scene of the crime. Europe has
been on alert in the wake of a string of
attacks including bombings in neighbouring
France and Belgium. The carnage came on
the fifth anniversary of right-wing fanatic
Anders Behring Breivik's massacre in
Norway that killed 77 people.
– Train attacks –
The violence happened just days after a
teenage asylum seeker went on a rampage
with an axe and a knife on a regional train
in Germany on Monday, injuring five people,
two of them critically. Interior Minister
Thomas de Maiziere said the teenager was
believed to be a "lone wolf" attacker who
appeared to have been "inspired" by the
Islamic State group but was not a member
of the jihadist network.
The assailant had arrived as an
unaccompanied minor in Germany in June
2015 and had been staying with a foster
family in the region of the attack for the last
two weeks. In May, a mentally unstable 27-
year-old man carried out a knife attack on a
regional train just southeast of Munich,
killing one person and injuring three others.
– Migrant influx –
Bavaria became the main gateway for
hundreds of thousands of migrants and
asylum seekers arriving in Germany. Hate
crimes and attacks against migrants
exploded after arrivals spiked to more than
one million last year, mostly from the Middle
East and Africa. Some 923 offences against
refugee shelters were reported in 2015,
compared to 175 the previous year,
according to figures from the interior
ministry. Of these, 177 were acts of
violence, up from 26 in 2014.
(AFP)ee

at 00:57
Email ThisBlogThis!Share to TwitterShare to FacebookShare to Pinterest