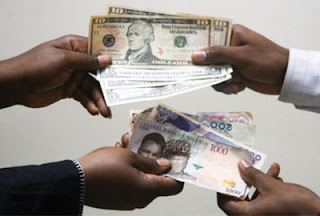 The sharp and steady depreciation of the
Naira at the inter-bank foreign exchange
market in the last one week has forced the
Central Bank of Nigeria, CBN, to intervene
yesterday to stem the slide.
The apex bank was said to have offered
about USD5.0 million each to dealers
amidst scarcity of foreign currency which

had persisted since last week Friday
following the sudden withdrawal of CBN's
interventionist resources.
Dealers said the supply from the apex bank
saved the Naira from crashing to N350/
USD1 yesterday as the rate was already
gone beyond N330 as at mid day before the
apex bank's intervention which relieved the
pressure and forced the rate down to less
than N310.
But the intervention could not save the
Naira from further depreciation at the
parallel market segment where it traded for
N380/ USD as against N375 it closed on
Thursday, a development which the dealers
said was connected to a perceived pressure
on external reserves and CBN's capacity to
continue to be the only supplier in the
market.
The local currency has been on a
downward spiral since the CBN eventually
took away the currency price ceiling it had
subtly placed after it officially floated the
currency mid last month.
The depreciation in the Naira is also mainly
attributed to the lack of supply from CBN
following reports that the apex bank had
reduced its forex allocations to sales in the
interbank market due to other pressing
needs for the foreign exchange resources
amidst dwindling dollar revenue from oil
sales.
Before now, s upplies other than the CBN
had avoided the inter-bank forex market
over complaints that the official rates did
not represent the true value of the Naira
against the dollar, hence they find their way
to push their dollars to the parallel market
segments.
According to some dealers international oil
firms who are major independent suppliers
of forex are now selling part of their hard
currency directly to petrol importers under
an arrangement with the government. They,
however, explained that they are still
looking at what will be a comfortable
exchange rate for sellers to come back to
the market and that is why the rates kept
going up in the past one week.
Last week CBN governor, Godwin Emefiele,
flew to Britain and the United States to try
to lure back investors into Nigeria's
financial market after nearly one year they
left due to CBN's exchange rate control
policy.
Vanguard learnt the trip was unsuccessful
as the investors told the CBN team that the
market was not yet transparent enough
adding that the external reserves level was
also uncomforting for them.
at 18:47
Email ThisBlogThis!Share to TwitterShare to FacebookShare to Pinterest