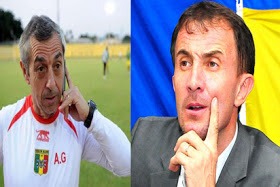 Reports gathered Friday indicate that the
Nigeria Football Federation (NFF) are
mulling over suggestion brought before it by
managers of two coaches in Milutin
Sredojevic and Alain Giresse for the job of
Super Eagles Technical Adviser.
Sredojevic populary referred to as Micho
presently handles the national team of
Uganda who are close to securing
qualification for next year's Africa Cup of
Nations and has in the past been linked with
the job of the Nigeria senior national team
with some reports suggesting that the Serb
was closed to being named as coach of the
team before Sunday Oliseh was appointed.
46 year old Micho was also on the shorlist
of Serbian coaches initially linked with the
vacant job before Paul Le Guen who later
rejected the job was recommended by the
Technical Committee of the Nigeria Football
Federation.
His case we gathered was brought to the
NFF by an agent who currently works with
the Nigeria senior national team and after
the failed attempt to engage Le Guen,
contact has once again resumed over his
availability.
On the other hand 63 year old Alan Giresse,
a French manager who has been coaching in
Africa since 2001 with stints in Morocco
with FAR Rabat and as well as the national
team of Gabon, Mali and Senegal.
The highly experienced Giresse was
recommended to the NFF that is set to name
a foreign technical adviser in the next 7
days for the Eagles who are currently under
the tutelage of local coach Salisu Yusuf.e

at 01:23
Email ThisBlogThis!Share to TwitterShare to FacebookShare to Pinterest