No urgent need to evacuate Nigerians in South Sudan – FG 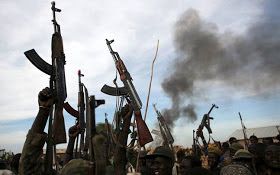 Foreign Affairs Minister, Geoffrey Onyeama,
on Friday said that there were no urgent
need to evacuate Nigerians in South Sudan
as there are no immediate threats to their
lives and property.
Onyeama, who stated this while briefing the
newsmen on the just concluded African
Union (AU) meeting in Kigali, Rwanda, said
that Nigerians in Juba were not under any
threat, as contacts with them are made
regularly and situation being assessed.
The minister said that most Nigerians doing
businesses in the crisis-ridden country have
returned to their location due to the cease
fire agreed upon by the warring parties.
Onyeama, who said that Federal Government
did not abandoned Nigerian in the war ton
country as reported by some social media,
said that there was no immediate threat to
the lives of Nigerian citizens in the place.
"As you know, we have large numbers of
Nigerians in South Sudan when the fighting
broke out, they took refuge in the Nigerian
embassy in South Sudan and there were
calls for evacuation.
"We took certain steps including putting in
place some form of logisdtics in the
ministry as one or two countries also
evacuated their citizens.
"We got in touch with National Security
Adviser and the Ministry of Defence to
explore the options in evacuating some of
our citizens.
"And of course, we are in touch with the
Nigerian embassy in the country, there is a
relative calm and peace in the country
because the parties involved in the crisis
have agreed to a cease fire," he said.
He also explained that, "Nigerians held up in
the embassy have now gone back to their
normal businesses and we were advised by
the embassy that the war had passed and it
was no longer necessary to take such
drastic steps.
Onyeama said that although the situation
could degenerate again, the situation was
being monitored adding that Nigerians in
Juba will be protected.
"We are on top of the situation and in touch
with the UN peace and Security Commission
to protect Nigerians and the Nigerian
embassy in South Sudan.
"We will do everything possible and we are
ready to do more to evacuate Nigerians," he
assured.
The fighting broke out on July 7, in Juba,
South Sudan, the world's newest country.
Hundreds of people, mostly soldiers, have
been reportedly killed in the fighting between
rival armed groups since then, raising fears
of a slide back into all-out conflict.
Report says that uneasy calm has returned
to South Sudan's capital, Juba, last Tuesday
after five days of fierce fighting between
troops loyal to President Salva Kiir and First
Vice-President Riek Machar.
The relative calm comes after the two
leaders ordered a ceasefire and directed all
commanders to lay down arms and report to
their unit bases.
No fewer than 272 people have been killed
in the renewed fighting that threatened to
plunge the world's youngest nation into war.
NANe

at 01:08
Email ThisBlogThis!Share to TwitterShare to FacebookShare to Pinterest