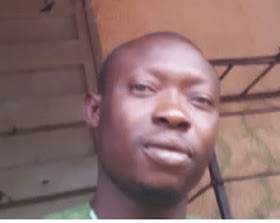 The Lagos State Police Command is on the
trail of a suspected burglar who allegedly
posted his picture on the Instagram account
of his victim.
The suspect, whose name had yet to be
identified, mistakenly posted the picture with
one of the phones reportedly stolen from the
victim, Sam Abimbola. According to Punch, the suspect had sneaked
into the victim's residence on Ago Palace
Way, Okota, Lagos, at about 3am on
Tuesday, carting away phones, a laptop and
a passport.
The burglar was said to have gained entry
into the apartment through the kitchen.
He also reportedly made away with
Abimbola's wife's jewellery and the identity
card of his sister-in-law, who lived with the
family.
While lamenting the loss, Abimbola reportedly
got a c all at about 7am from a friend, who
alerted him to a picture posted with one of
the stolen phones on his (Abimbola's)
Instagram page.
Abimbola told Punch correspondent that he
had woken up around 5am to prepare for
work when he discovered the house had been
burgled.
He said, "I slept around 2am on that day and
my sister-in-law woke me up around 5am,
saying that her bag was scattered in the
living room. That was when I discovered that
a burglar had entered into my apartment. He
cut through the window and got access into
the house through the kitchen.
"He entered into my bedroom, stole my
passport, laptop, two phones – a Samsung
Note 5 and a Samsung tablet – my sister-in-
law's ID card and her money. The burglar
also stole my wife's accessories and took
some bottles of water from the fridge.
"I don't know the extent of what was stolen
from my wife's valuables because she was
not around. He ransacked a bag where my
credentials were but fortunately, he didn't go
with them.
"Around 7am, he mistakenly posted his
picture on my Instagram account with my
phone. I am sure he must have used the
phone to take the picture.
"I have reported to the police at the Ago
Palace division and some of the policemen
said he was a known face at a joint in the
area."
The sister-in-law, who did not want her name
in print, urged the police to track down the
suspect and bring him to book.
"I am certain he was the one who attacked
our house. He could not have sold the phone
to somebody before 7am when he posted the
picture," she added.
The Lagos State Police Public Relations
Officer, Dolapo Badmos, who confirmed the
burglary to our correspondent, said the police
were on the trail of the suspect.
Badmos, a Superintendent of Police, added
that the Commissioner of Police, Fatai
Owoseni, had instructed the division to
transfer the case to the Special Anti-Robbery
Squad at the command headquarters in Ikeja.
She said, "The victim reported the matter at
the station and the police will ensure that the
suspect is tracked down. The CP has
instructed that the case should be transferred
to SARS in Ikeja for discreet investigation.

at 02:44
Email ThisBlogThis!Share to TwitterShare to FacebookShare to Pinterest