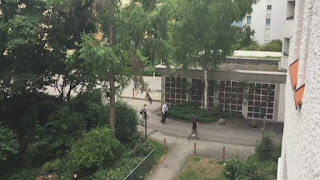 Munich's main train station has been
evacuated and metro and bus transport in
the city suspended on police orders.
The decision followed the killing of at least
six persons by gunmen, who attacked a
shopping centre in the city.
Three gunmen were involved in the shooting,
according to a police statement, citing
witnesses.
"We suspect terrorism," a Munich police
spokesman told AFP.
The shooting spree began before 1600 GMT
at a McDonald's restaurant and continued
on a nearby street before the gunmen moved
into the OEZ shopping centre, a police
spokeswoman said.
Europe has been on alert for terrorism in the
wake of a string of attacks including
bombings in neighbouring France and
Belgium.
The OEZ shopping centre, which opened in
the 1970s near the city's Olympic stadium,
was surrounded by armed police and
emergency vehicles, while a helicopter
buzzed overhead.
"There is a major police operation under
way in the shopping centre," Munich police
said on Twitter, urging people to avoid the
area.
Emergency vehicles were seen in the streets
outside, as shoppers rushed away from the
mall, some carrying children in their arms.
"Attention — avoid the neighbourhood
around the OEZ. Stay in your homes. Leave
the street," the Munich police tweet said.
Germany has so far escaped the kind of
large-scale jihadist attacks seen in France.
But the shooting comes just days after a
teenage asylum seeker went on a rampage
with an axe and a knife on a regional train
near Wuerzburg, also in Bavaria on Monday,
injuring five people, two of them critically.
One victim is still fighting for his life, the
hospital treating him said Friday.
(AFP)r

at 01:14
Email ThisBlogThis!Share to TwitterShare to FacebookShare to Pinterest