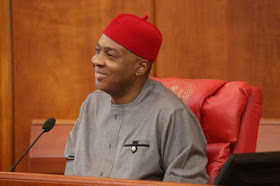 The new Chairman of the Senate Committee
on Petroleum Resources (Downstream),
Kabiru Marafa (Zamfara), said yesterday
that Senate President Bukola Saraki owes it
a duty to respect his party, All Progressives
Congress (APC), on issues affecting the
legislature.
"We are in power.It is our own time and we
should be accorded all the necessary
cooperation. We should be seen to respect
the party," Marafa, spokesman for the anti-
Saraki Unity Forum in the Senate told State
House correspondents yesterday after a visit
to President Muhammadu Buhari.
He was responding to a question on whether
Thursday's reshuffle of some Senate
Committees would now bring an end to the
bad blood generated by Saraki's emergence
as president contrary to the APC's preferred
candidate.
He said though the exercise was normal in
the legislative arm, it was largely part of
reconciliation between the All Progressive
Congress (APC) and Saraki.
His words: "I think reshuffling of committees
is not new in any parliament. What made
that of yesterday (Thursday) a little new is
the circumstances of the emergence of this
leadership and what followed.
"What happened yesterday (Thursday) is a
result of the efforts the party has been
putting in for reconciliation in the last few
days."
He said peace has returned to the Senate.
"Yes, as long as the party comes in and the
will of the party is respected. We are not at
loggerhead with anybody. It is not like we
hate somebody.
He described Saraki as "one of my very
close friends and seniors in the 7th
assembly."
"What you saw happenis what I will describe
as loyalty to the party. The constitution of
the Federal Republic of Nigeria recognizes
only the party, it doesn't recognize any
individual."
Asked whether the Unity Forum would now
withdraw the suits its members filed against
Saraki in the light of the committee
reshuffle,Marafa said: "We didn't go to court
because we didn't like the faces of those
that emerged, but this is the will of our
party.
"During the 7th assembly, we accorded the
ruling party at that time the utmost
cooperation and we knew the committees
that we were given that time.
He likened the relationship between the
executive and legislative arms to that
between a husband and his wife, and
expressed optimism that the crisis between
his state governor, Abdulaziz Yari and the
State House of Assembly will soon be
resolved.
"So there is nothing new as far as I'm
concerned. We belong to the same political
party and we are one. We are on top of the
situation and we are trying to calm the
nerves and look at the problem from its
root," he said.
" We will resolve the issues amicably. By
our tradition and culture, Zamfara has never
had that kind of problem."
He ruled out any possibility of the Senate
impeaching President Muhammadu
Buhari,saying no serving senator is even
contemplating any such move.

at 01:15
Email ThisBlogThis!Share to TwitterShare to FacebookShare to Pinterest