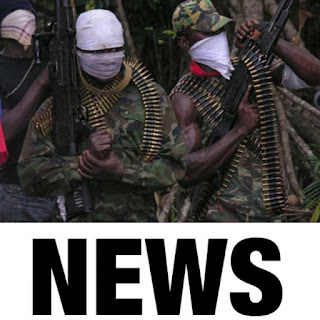 Militant group the Niger
Delta Avengers (NDA) on Friday
denied being in talks with Nigeria's
government to end attacks on key oil
facilities that have cut output and
hammered revenue.
President Muhammadu Buhari said
on Thursday his administration was
negotiating with the rebels through oil
companies and security agencies.
But the NDA said on its website that
the "truth is that we are not aware of
any peace talks".
"If there is any such peace talk, it
means the president is talking to their
mercenaries set to disturb the
genuine struggle of the agitators," it
added.
The rebels have previously scoffed at
claims they are involved in back-
channel discussions and accused the
government of not being sincere.
"If we are to engage in any peace talk
we made it clear that the international
community must be part of it," the
statement added.
"The president knows our demands.
So they should stop deceiving the
international oil companies, the
general public and the international
community."
Meanwhile the Ijaw Youth Council
(IYC), an umbrella body for youths in
the southern Niger delta region, also
dismissed the government's claim of
dialogue.
"President Buhari and the federal
government of Nigeria should stop
deceiving Nigerians and the
international community about talks
with Niger Delta militants on how to
stop attacks on oil facilities in the
Niger Delta region as this is highly
ridiculous and laughable," the IYC
said in the southern port city of
Warri.
The group said it was "embarrassing"
for Buhari to say oil majors were
negotiating on behalf of government
as "the issues at stake are
completely beyond the capacity of oil
companies to resolve".
The Avengers have claimed a string
of devastating attacks against the
state-run Nigerian National Petroleum
Corporation (NNPC) as well as oil
majors Shell, Chevron and Eni since
February.
The attacks have reduced output at a
time when Nigeria is struggling with
low global crude prices which have
hammered government revenues,
weakening the naira currency and
pushing up inflation to near 11-year
highs.
The rebels want oil majors to leave
the Niger delta, blaming them for
contributing to widespread poverty
and under-development of the region.
They also seek self-determination for
the oil-producing states in the delta.
On Thursday, the new group
managing director of the NNPC,
Maikanti Baru, met chief of defence
staff General Gabriel Olonisakin in
Abuja and appealed for military
support to secure facilities.
AFPr
at 09:49
Email ThisBlogThis!Share to TwitterShare to FacebookShare to Pinterest