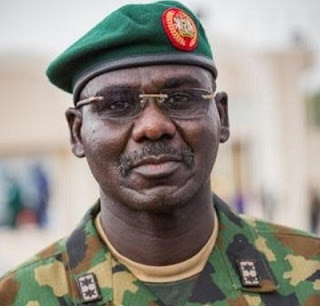 A recent statement credited to the army
boss, Lt General Tukur Burutai reveals the
Nigerian army would employ the use of
force to suppress the Niger Delta militants
destroying oil facilities at the failure of
peaceful negotiation.
This has infuriated one of the influential
Niger Delta militant groups named the
Movement for the Emancipation of the
Niger Delta, MEND trying to broker peace
in the region, according to the Vanguard.
The group on Monday night cautioned
Burutai, to stick to his principal
responsibility and stop making political
and inciting statements.
MEND in a statement by its spokesperson,
Jomo Gbomo, frowned at comments,
Monday, in Port Harcourt by Burutai that
military authorities would resort to the
use of force if dialogue to resolve the
current Niger-Delta crisis fails.
The militant group asserted: "MEND
hereby makes it clear that General
Buratai's statement is insensitive,
provocative, unprofessional and prejudicial
to the fair outcome of the ongoing
preliminary talks regarding the Niger Delta
crisis between representatives of oil
companies and security agencies, on the
one hand; and the Movement for the
Emancipation of the Niger Delta (MEND),
on the other hand.
"We, therefore, warn the Chief of Army
Staff to guard his utterances, refrain from
making political and inflammatory
statements and stick to his primary
responsibility."
On its controversial dialogue with the
federal government, it said: "We use this
medium to appeal to the good people of
the Niger Delta to remain patient with the
administration of President Muhammadu
Buhari."
The group urged them to "keep hope alive
as MEND and the Aaron Team 2 Dialogue,
Peace and Development Initiative, led by
Mr. Odein Ajumogobia, and HRH King
Alfred Papapreye Diette-Spiff are working
assiduously to secure sustainable
concessions for the region from the
government."
"While MEND has already kick-started the
dialogue process with the ongoing
preliminary talks, the Aaron Team made
up of distinguished and accomplished
personalities from the region, are waiting
on the sidelines to conclude the dialogue
process. "r

at 12:53
Email ThisBlogThis!Share to TwitterShare to FacebookShare to Pinterest