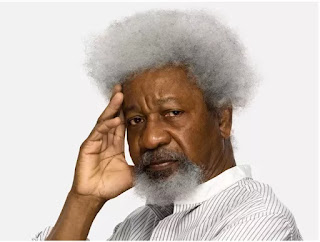 My missive is a directed to the man I cherished most from childhood and literary principality: Prof. Wole Soyinka. Yet my unapologetic wave to professor’s paramours because of the expected affective judgement and barrage. Without preamble sir, to whom much is sowed into, much, ought to be reaped from. I stand on
that protocol to reap bountifully from you sir. The principle of bountiful harvest I hold in esteem is becoming an illusion viewing your state on the state of our nation and what the political cognition of youths. The philosophy human governance in Nigeria has widely been gored partly by your stand to the extent that I am tempted to renounce my allegiance to your literary temple of sagacity, not a threat sir. Consequently, I hereby subpoena your honour sir, to please file a defence on these accusations and allegations. If not, we may assume you are guilty because silence is becoming complicity. Sir I am a boy of no ethnic supremacy, identity neither primordial loyalty but to elicit that am one of those youths who read your poems and saw the future through it. Now, I am out of cocoon to match your deeds with your position. Ontological reality explained to me that I should stand to query your philosophy of abstinence. This is to give relief to us the curious minds and others who believe you need to educate us further.
Here sir in the court of conscience where legality bows to divinity and theodicy. Divinity will judge me if my accusation is a ruse without recourse to humanity. I may in turn judge your speeches and your deeds you lured me and others into which says “any government, any regime, any junta and any ad-hoc must be in the interest of the masses” and if not “we’ should resist and defy such government to submission. Archive revealed that your radicalism is/was a hemlock to the tyrants. Here are the youths now whose resistance has trans-substantiated to “protein of the tyrants” bad governments grow healthy with it and fester. Sincere youths from Hausa and Igbo lands are lamenting...why! Sir, explain to us as in a document why we are stranded, I mean the youths. I may transcribe it to others latter for those coming.
Professor Soyinka sir, emulating your time determined illusion; this is a request before the court of conscience to correct us where we erred, chastise us where we derelict and direct us where we went deviant of road maps. Governance was controllable by mass movement as proved by your speeches in University of Ife. I was forced to imbibe them as creed of democracy. Several times I have tried to prove to other but been scorned. My query sir: Why the scarcity of elders of virtues? Why are we left with expired elders without exemplary legacy in governance? Sir, tell us in this court of providence youths are stranded in the desert of ignorance? The poem and the poets are becoming dormant because of strange denial between the writer and the written. Sir, in this court, your diplomatic status is appealed to and we embossed our grievances. The gulag room that inspired “The Man Died” will bear us witness if we do not query you sir. My accusation sir: why don’t you give us the process of intellectual revolt? why don’t you model the procedure of intervention as you intervened in your visit to Ojukwu then and avert same carnage looming now. Why don’t you write a “witness” that will judge us that you said so? Why don’t you give impetus to the youths to regain consciousness and desist from clapping for their oppressors? Sir or shall we all migrate and let Nigeria become desolate? Noami Chomsky still lives in America despite his critic of the government. Should we assume you are now in vantage zone and cares not? Why don’t you educate us formally and informally in a document how to go about it so that “structured and institution will subsume democracy”. APC, PDP or APGA are inconsequential here sir but humanity as our focus.
Sir I appeal to your nature as extension of Mother Nature, a model built within nature with power to last with immortal desire. Can you sir, via literary excellence tell the youths why we get it wrong. Tell us that you are NOT a conspiracy to the situation by silence. Tell us where you stopped and where next predicatively. Explain to us what we shall do to invigorate the artisans, the sage, the political harlots without sagacity, the lettered and unlettered and the elites to enliven emancipation consciousness. Tell us you have nothing to lose for telling us the truth. Age is here, sir you owe us, don’t bother to write sir kindly exonerate yourself by dictating it to stenographer. Sir, “Comfortable exile is never a relief for homestead rot”, never. If your blood and flesh live in America believe it sir, your soul and spirit belong to Abeokuta. Sir, to avert history from making us history we expect your response.
Sir we need your words...........we need it urgently!
Yours Faithfully,
Oni Gbolabo John
onigbolabo@yahoo.com
at 03:37
Email ThisBlogThis!Share to TwitterShare to FacebookShare to Pinterest