7 Senators who walked Customs Boss out of plenary 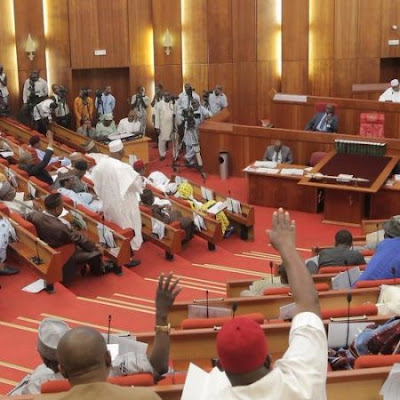 The senate has asked Hameed Ali, comptroller general of the Nigerian Customs Service (NCS) to reappear before it on Wednesday, March 22, in his customs uniform.

The Senators in a voice vote mandated the Comptroller General of Customs to come in uniform on Wednesday 22nd March, 2017.

Here are what seven Senators told Hameed Ali At the Senate today:

Sen. @BI_Gemade seconds and says it is respectable and important for the CG @CustomsNG to wear his uniform.

Sen. George Sekibo says the CG @CustomsNG must re-appear before the Senate in his uniform.

Sen. Magnus Abe pleads with the CG @CustomsNG to wear his uniform to preserve the image of the Customs and perception of other institutions.

"CG needs to go & apply the law of the land by wearing uniform before he addresses us, as stipulated in our constitution"- Sen B. Jibrin
Sen. Ali Wakili says the Senate should temper justice with mercy, "he is a man of integrity, we would liaise with CG

The circular issued by the CG @CustomsNG stating to the Senate that he won't wear his uniform is derogatory. - Sen. Ibn Na'Allah.

Sen. Na'Allah cites Sections 7,8 &10 of the Customs Act which states that the Customs shares same privileges with police and other institutions.

He said the rules of the Nigerian Senate still stands on the issue of the uniform.
at 03:10
Email ThisBlogThis!Share to TwitterShare to FacebookShare to Pinterest