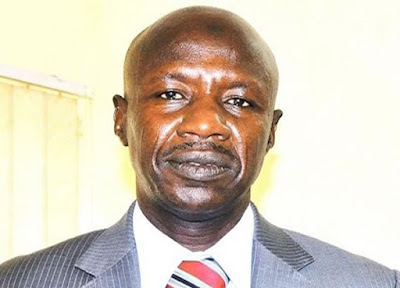 The Senate of the Federal Republic of Nigeria, on Wednesday, refused to confirm Mr. Ibrahim Magu as the Chairman of the Economic and Financial Crimes Commission (EFCC).
President Muhammadu Buhari had late last year submitted the name of Mr. Magu to the Senate, for confirmation as substantive Chairman of EFCC, having served in acting capacity since November, 2015.
The Senate however, turned down his confirmation, citing security reports as reason why it would not go ahead to confirm Magu.

President Buhari, however, resubmitted Magu’s name on the 23rd of January, 2017, after consulting with the leadership of the Senate.

While answering questions from the Senators on the allegations preferred against him by the security agencies, Magu said he was arrested and detained by the Nigerian Police for over 2 weeks, over the allegation that he was carrying official files and documents.

“I was locked longer than necessary for over 2 weeks, I was detained with armed robbers at Area 10.

“Another allegation was that, I was living in an apartment which belongs to Air Commodore Mohammed Umar. The truth was that, I was staying in Karu and was almost late for official assignment, so the authority got a new place for me”, Magu explained.

He gave a brief scorecard of his regime as acting Chairman of the EFCC, which includes, the $153m, $927m, £74,000 recently recovered from Andrew Yakubu and others, as well as the N49m recovered at the Kaduna Airport on Tuesday.

A mild drama however, turned out when the Senator representing Kogi West, Dino Melaye, drew the attention of the Senate to a security report submitted to the office of the Clerk on Tuesday, 14th March 2017.

Paragraph 14 of the said report reads in part: “In the forgoing, MAGU has failed the integrity test and will eventually constitute a liability to the anti-graft agency”.

The letter which emanated from the office of the Department of State Security (DSS), was however faulted by Magu and some Senators.
at 11:16
Email ThisBlogThis!Share to TwitterShare to FacebookShare to Pinterest