APC is the greatest beneficiary of our crisis, we are playing into their hands - Dickson to Makarfi 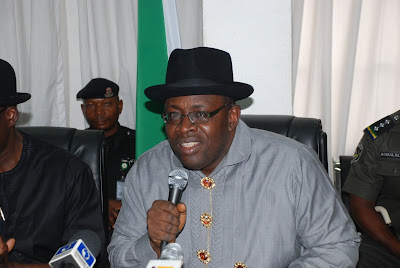 Seriake Dickson, governor of Bayelsa state, says the Peoples Democratic Party (PDP) is playing into the hands of the All Progressives Congress (APC).
Dickson said this in reaction to the statement of Ahmed Makarfi, chairman of the caretaker committee of the PDP, that the governor does not mean well for the party.
Dickson, who is of the Makarfi group, was selected as chairman of the national reconciliation committee.

However, he lost out with the caretaker committee after submitting a report to Ali Modu Sheriff, recommending a convention as part of efforts to unite the party.

Makarfi had accused Dickson of making a proposal which was against the position of the 10 PDP governors who met with former President Goodluck Jonathan to seek solution to the crisis consuming the party.

“Out of the 11 PDP governors, he (Dickson) pulled out and made a proposal, which he presented to Modu Sheriff. Well, for us the issues in the PDP are not just about conducting convention, it is about more fundamental issues,” Makarfi had said.

But in a statement on Tuesday, Dickson said the “ongoing blame game, name-calling and propaganda will not in any way help” the party.

“We are by such actions de-marketing ourselves and playing into the hands of the All Progressive Congress (APC) which appears to be the major beneficiary of the crisis rocking our party,” Dickson said in a statement signed by Daniel Iworiso-Markson, his chief press secretary.

“What we should be doing now is to look for an amicable solution to come out of where we are, rally round ourselves and form a bond like never before since INEC had released the timetable for the 2019 general election.

“Secondly, everyone especially in the PDP governors forum can testify that I never supported Senator Ali Modu Sheriff as national chairman. I strongly canvassed against his choice because he was new to our party.

“I felt that we needed a fresh face for a new beginning. But as a democrat I believe ‎in the plurality of opinions which made me to tag along. Now with the appeal court judgment affirming him as the national chairman, it is only legal and strategic for all leaders of the party to engage him on a template such as what we have proposed.

“Our conviction is that the recommendations of the report chief of which is to hold a national unity convention will finally put an end to the hydra-headed crisis.”

Dickson advised those “who think they have a better solution outside what my committee has done should come forward with ‎it for the interest of our great party.”
at 04:26
Email ThisBlogThis!Share to TwitterShare to FacebookShare to Pinterest