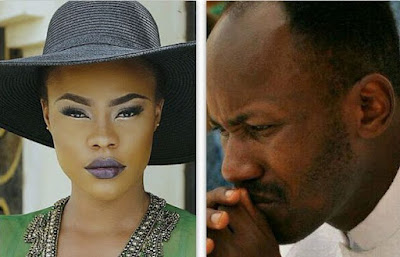 It has been alleged that Mr. Suleman acquired a N160 million duplex located in Mende Maryland, Lagos and a $76,000 brand-new Mercedes-Benz 450 GL for the curvaceous actress and that they had been neck deep in a relationship.

Writing on her Instagram page which has been made private since Stephanie named her in the ongoing scandal, Daniella says she has been talking to her lawyers and that they will respond on her behalf.

She wrote, “In adherence to my lawyer’s counsel I have been mute since I read some funny fallacies. My lawyers will do the talking but for sure a lot of people will go down for getting my name involved in something I had no business with.so be careful about what you say or write about me my being mute is for legal reasons. Lies I have not spoken to anyone on the phone or made any comment on any social media platform to any media house or blogger. So, please stop all these fake lies and stories.”

According to a report published by Sahara Reporters, popular Lagos-based fashion designer, Adebayo David Eweje aka David Wej, initially owned Daniella’s house before it was sold.

Sahara Reporters reports that after buying the house, Mr. Suleman renovated it with N120 million before handing it over to the actress.

The actress showcased the property, which has two duplexes last year on Instagram. The property is located on Alabi Street, off Okey Okeke Drive in Arowojobe Estate in the Mende-Maryland area of Lagos.

When contacted, Eweje said he sold the duplex before 2013 but he has no idea to whom the house was sold.

Also a producer, entrepreneur and the CEO of Dcovi Entertainment Company, she has a penchant for acquiring luxury items. In 2014 she bought a $5,700 Vertu Constellation phone.

She posted the photo of her cars parked inside her Lekki mansion in 2014 and wrote: “She never said she was the richest but she is far from broke.”

She also bought a G-Wagon Benz and flaunted a Range Rover SUV in December 2015 to celebrate Christmas in style. Better known for her ostentatious display of wealth on Instagram than for her acting prowess, the hitherto outspoken actress has kept a low profile since the scandal broke out.

Daniella shot into prominence in 2013 for her role in Lagos Cougars.

Meanwhile, the man at the centre of the controversies, Apostle Suleman is currently in the United States on a 4-day ministration tagged Power Explosions. The program, which kicked off on Tuesday, will hold in D.C., Virginia, Maryland, New York, New Jersey, Connecticut and Philadelphia.

His teeming church faithful and supporters on social media have shared photographs of his arrival in the U.S.
Mr. Suleman has since denied having a relationship with Miss Otobo.
According to a statement by his spokesman, Phrank Shaibu, the pastor denied ever meeting the woman in person, or making any marriage proposal to her. He also denied being involved in Ms. Otobo’s reported arrest on March 3.

But, two letters published quoted Ms. Otobo’s lawyer, Festus Keyamo, as saying that the Canada-based Nigerian started a relationship with Mr. Suleman in 2015 and became pregnant for him in 2016.
at 05:56
Email ThisBlogThis!Share to TwitterShare to FacebookShare to Pinterest