Boko Haram: Why troops were refusing to go to battle front – DHQ 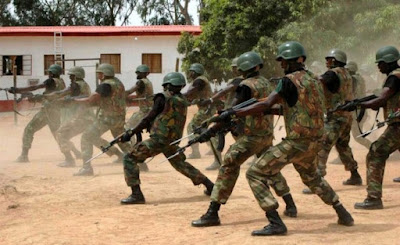 The Defence Headquarters, yesterday, said the initial recalcitrant moves by military troops to go to battle front against Boko Haram terrorists in the North East were due to strong media propaganda deployed by the terrorists which had portrayed them as winning the battle against the military.

In an apparent reference to when the terrorists took control of a large portion of the country in the face of heavily military deployment in the region, the Defence Headquarters, which regretted that troops were reluctant facing the terrorists, attributed strong media control of the enemy group to the development. The new Director of Information, Defence Headquarters, Major General John Enenche, said this at a media chat with Defence Correspondents,in Abuja.

To this end, he charged the media to always consider national interest above all other interests, saying their unfavorable reportage was capable of demoralising the peace efforts of the military. Even as he directly did not mention the North East episodes, his reference inferred what he meant.

Hear him: “Times were even there where people who were armed refused to go to combat because of propaganda or the capability of the enemy which may not be true. Where did it go out from? Of course, the media.

”So, I want you to be conscious from now on that whatever you are doing matters in modern warfare.The media is another key altogether in the field of confrontation, in field of either to lose or win. ”

He charged journalists to use their profession to enhance peace not only in the country, but beyond. ” My dear Nigerian and international journalists, we should use our own field to enhance peace worldwide, in Nigeria and for the members of the Armed Forces of Nigeria. Enenche tasked the media on objective and accurate reportage of the military operations in security situations in the country, saying the media was instrumental to the success or otherwise of the military in that regard.

He said the media can only show its appreciation of the military efforts at keeping the country not only safe but secured through accurate reportage of the military operations.

This was even as it hailed the operations of the military so far in security affairs of the country, saying the continued corporate existence of the country has been largely due to the Nigeria’s military which it noted, had unshakable loyalty to the federal administration at all times.

“We should first of all look at what is our core national interest. It is to remain as a corporate Nigerian where peace and tranquility rein, where we can go about our businesses. ” I want to enjoin you that let us keep that as our focus first and foremost.

“Your work can upturn this thing. But if we have that as as our focus particularly in our reportage, in our analysis of situation before getting the general public worldwide and locally to know, we can prevent some ugly situations, “he said.

Enenche said the military was ever ready to defend the sovereignty of Nigeria, saying it was not shirking its responsibility to that effect. While hailing the military for keeping the country one in spite of several threats to its corporate existence, Enenche said threats which other nations could not handle, leading to their divisions, happened in Nigeria without success.

“And for the military, our own is to protect the territorial integrity of this nation.
“Without being told, I would tell you that we are the backbone of the corporate existence of this country. I can confidently tell you that.
“So, I will tell you that what has caused others to disintegrate worldwide has happened here and we still remain intact, with the support of the military.

“Above all, the military we have now have total loyalty to the Federal Government of Nigeria.”
He said negative reportage of activities of military can demoralize personnel giving their best to the service of their nation and appealed to the media to always report the truth.

Hear him: ” In our reportage, what we tell the world, what we tell Nigerians affect our military. That is what I would want us to be conscious of. ” We are here now because the environment is conducive. If it was not conducive, we cannot be here. That is not without prejudice to the fact that truth must be told at all times, we must tell people the truth. Sometimes, people say truth is bitter but however bitter it is, we must tell people the truth, we should not concoct stories.”

He urged the media not to play into the hands of negative portrayal of the Nigerian military by some organizations, saying the military has never derailed in the course of its operations in security matters.

“As Armed Forces of Nigeria, we are bound by our training first and foremost, by conventions, rules and regulations and I would say that forget about what people might say.

We are almost always on the right side of doing things but because you don’t always have the privilege of getting people to present their own sides of the story, people might just say whatever they want to say, “he said, adding however that” it’s left for us to prove it that they are wrong. ”

He said besides the Armed Forces involving the Army, Navy and the Air Force which directly engage in warfare, the media was equally an unseen veritable tool at the war front.

” I will tell you a fourth one now-the fourth sphere of battle is the media. I’m sure maybe one or two people or some may not have thought in that line or would not have appreciated it from that angle but that’s the truth.

“Whether you like it or not, whatever you churn out from the electronic media, from the print media, it affects the world, it affects your locals, it affects even we the armed forces.

“There were times in history where crises were calmed due to positive news coming out, you can call it propaganda. “There were times where people that you were even defending turned against the forces defending them because of negative propaganda, “he said.
at 03:37
Email ThisBlogThis!Share to TwitterShare to FacebookShare to Pinterest