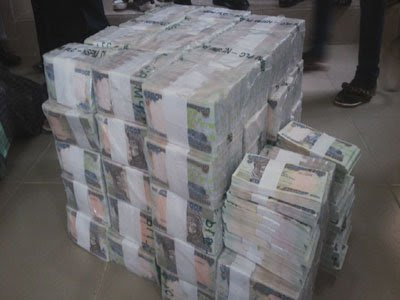 One week after it started operations as a replacement airport for the Nnamdi Azikiwe International Airport, the Kaduna International Airport has come into the news for a strange reason.
The sum of N 49 million was intercepted by the operatives of the Economic and Financial Crimes Commission as it was being ferried out through the airport. A man believed to be the owner ran away before EFCC operatives could question him.According to a statement released by the Spokesman for the EFCC, Mr. Wilson Uwujaren, the cash was found during a routine baggage screening. According to the information, the money was contained in five unmarked and unaccompanied large black coloured Buhu sags.“Upon examination, the bags were found to contain fresh crispy Naira notes of N200 denomination in 20 bundles totaling N40 million and N50 denomination in 180 bundles totaling N9 million with seal purportedly emanating from the Nigeria Security and Minting Plc (NSPM) as seen in the labeled sealed packs.The EFCC spokesman said investigation into the case was in top gear to unravel the culprits behind the attempted illegal movement of the cash.“We will get to the root of this crime. There is a way we can collaborate with some agencies to trace the source of the N49million.“We will also deploy forensic equipment and retrieve CCTV footage at the airport to identify the suspect,” the source said, pleading not to be named so as not to jeopardise the investigation.
at 04:08
Email ThisBlogThis!Share to TwitterShare to FacebookShare to Pinterest