I will never contest against Buhari in 2019 – Okorocha 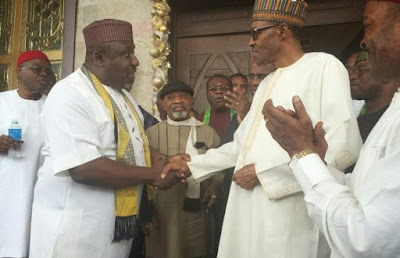 Okorocha was speaking during a breakfast meeting with journalists in the state at his private residence in Owerri on Tuesday.

“I will never run against President Buhari but would continue to support him in the overall interest of the nation, especially when he has stabilized the nation.

“I want to also say that those in Imo who made many political enemies should forget the Douglas House. We need people with free mind. I have killed the clannish nature of the state where people consider where you come from before doing anything for you.

“The politics of sentiment must be discarded and discouraged. It is shame for somebody to hope on zoning to win elections,” he said.

He also insisted that his administration had never borrowed a dime from any bank in the country.

Okorocha stated that his detractors were cooking up the stories, because of the numerous projects he has executed in the State.

He said: “For posterity, this government is not owing any bank or person any amount except for the bailout fund for which 100 million naira is being deducted from the source monthly. Any subsequent government that comes and says that Rochas borrowed is a criminal one.”
at 05:15
Email ThisBlogThis!Share to TwitterShare to FacebookShare to Pinterest