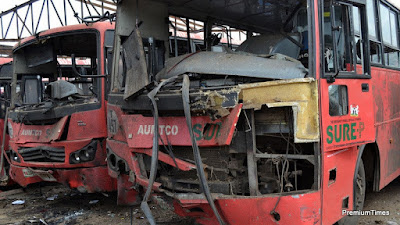 Hearing into the case of the alleged masterminds of the April 14, 2014 bomb blast that killed over 75 persons at a motor park in Nyanya Abuja, was stalled on Tuesday due to lack of a court interpreter.

At the resumed trial on Tuesday, the trial judge, Justice Ahmed Mohammed said that only two out of the six defendants understood English, which was the language of the court.

Mr. Mohammed noted that without an interpreter the proceedings of the day would amount to nothing as they could be challenged in future.

“I do not know if I can proceed without an interpreter since only the first and sixth defendants understand English.

” I will put the prosecution on record to have said that they have their second witness in court and are ready to proceed with the trial.”

Following complaints over the terrible conditions the defendants were being detained under, the judge asked the defence counsel to bring an application asking the court to order that the defendants be remanded in prison custody.

He adjourned the matter till March 27 for continuation of the trial within trial.

Earlier, Abdul Mohammed, counsel to one of the defendants, had told the court that the defendants were being detained under very poor conditions adding that two of them had developed asthma as a result.

He also complained that even though the court had ordered the DSS to allow the defendants have access their relatives, some of them had not been able to contact their relatives.

When the judge allowed the defendants to speak, one of them appealed to the judge to send them to prison custody due to the inhuman treatment he said the DSS officials were subjecting them to.

“My lord, I have never been to prison but I think now I will prefer to be sent to prison rather than remain in the DSS custody.”

Mr. Ogwuche, the first defendant in the matter, also told the court that they were kept in an underground cell and the only time they saw sunlight was when they had a day in court.

He complained of poor ventilation in the cell which was why two of them had become asthmatic adding that if nothing was done, they would all be affected.

The News Agency of Nigeria reports that the court had declined a request for the defendants to be remanded in prison custody and ordered that they remain in DSS custody pending the determination of the case against them.

The court’s order was sequel to an application by the then Director of Public Prosecution, Mohammed Diri, that the defendants be detained in DSS cell in view of recurring cases of jail break in the country.

The defendants are standing trial for allegedly conspiring to commit an act of terrorism on April 14, 2014.

This was by driving a Volkswagen golf car laden with Improvised Explosives Devices, which they parked at the Nyanya motor park before it was later detonated, killing about 75 persons and leaving several other wounded.
at 14:42
Email ThisBlogThis!Share to TwitterShare to FacebookShare to Pinterest