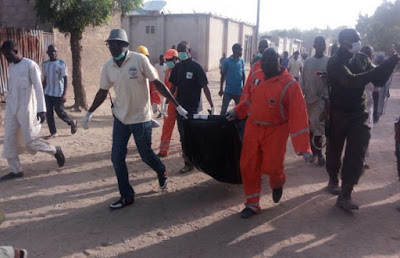 It was gathered that the attack occurred at the Muna garage in Maiduguri, which was just recently attacked by the insurgents.The incident was confirmed by the spokesperson to the National Emergency Management Agency, NEMA, North-East, Abdulkadir Ibrahim in a chat with newsmen.According to Ibrahim, “It’s true, the incident occurred.“Four suicide bombers at about 1am struck and several people died. I will send you more details soon.”In a statement Ibrahim sent to newsmen, NEMA said the suicide bombers comprised of four female teenagers.According to the statement, 6 people were killed in the attack and several others injured.The statement reads, “Four female teenage suicide bombers killed two other men; 6 people died when they detonated explosives at Usmanti, along muna Garage road at about 1. 15 am.“16 people who got injured were administered with first aid by rescue workers before being transported to the state specialist hospital and the University Teaching hospital in Maiduguri Borno state.”
at 04:18
Email ThisBlogThis!Share to TwitterShare to FacebookShare to Pinterest