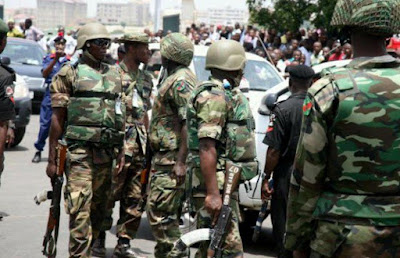 A fresh case of soldiers’ brutality against a female Nigerian citizen is being investigated, the Nigerian army has said.

Six soldiers, the army said, are currently in detention over the incident.

This is the third time such incident would be occurring within a month.

The victim whose name was given as Ruth Orji was said to have been beaten on Sunday by soldiers from 174 Battalion, Ikorodu, Lagos State, for daring to challenge a soldier who reportedly slapped her brother.

Graphic photos of the brutalised woman were shared on the social media, prompting Nigerians to call for immediate action against the culprits.

The army said on Thursday that the incident was “highly regrettable”.  It thanked the press for “bringing such incidences to (the) fore”.

“A Board of Inquiry has been constituted by the Commander 9 Brigade, Brigadier General Elias Attu to investigate the circumstances that led to the incident, determine the level of the soldiers involvement, submit its findings and recommend appropriate disciplinary measures,” the army said in a statement issued by a spokesperson, O. M Daudu, a lieutenant colonel.

Ms. Orji has been taken to the hospital for treatment, the army said.

The army in February had demoted and imprisoned two soldiers for assaulting a physically challenged man in Onitsha, Anambra State. Another soldier was jailed, also in February, for 28 days for molesting a civilian in Port Harcourt, Rivers State.
at 03:10
Email ThisBlogThis!Share to TwitterShare to FacebookShare to Pinterest