No Yoruba man is praying for Osinbajo to succeed Buhari – Group 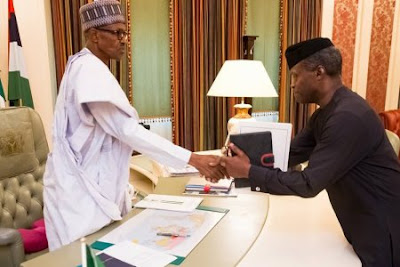 The President General of Yoruba Community Council in Northern Nigeria, Alhaji Abdulganiyu I. Oguntoyimbo, has said no Yoruba man is praying that Yemi Osinbajo succeeds Muhammadu Buhari as President.
Speaking during a prayer session for Buhari who just returned from medical vacation from London in Abuja, Oguntoyimbo said nobody from the South West was interested in dragging leadership role with Buhari.
According to Oguntoyimbo, “There is no Yoruba man that is praying for Vice President, Prof. Yemi Osinbajo to succeed Buhari. The relationship between the two of them is very cordial.

“As a matter of fact, Yoruba’s relationship with Buhari administration is cordial. We support him totally and if we support anybody we don’t go back.

“We are with Buhari yesterday, today, tomorrow and always. We believe that what he is doing is not just for today but for tomorrow.”

It would be recalled that before embarking on his medical vacation in London, Buhari transferred powers to Osinbajo.

Osinbajo had received a lot of commendations from Nigerians for his performance while the President was away.

Recall that before traveling to the United Kingdom on medical vacation, President Buhari transmitted power to Osinbajo to act as the acting president of Nigeria.

During the period, Osinbajo handled the affair of the country by improving on the economy.
at 09:57
Email ThisBlogThis!Share to TwitterShare to FacebookShare to Pinterest