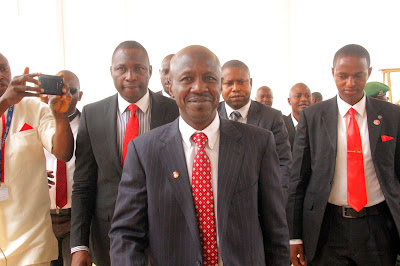 Laughter erupted on the floor of the senate on Thursday after Ibrahim Magu, acting chairman of the Economic and Financial Crimes Commission (EFCC), mistakenly referred to a lawmaker as Fayose.

The anti-graft czar made the mistake while responding to one of the questions posed by Duro Faseyi, lawmaker representing Ekiti north senatorial district.

Faseyi had asked Magu to give a detailed account of the money recovered by the commission.

“How much has been recovered, including dollars, since you took charge of the commission?” the lawmaker asked.

In his response, Magu said he could not give a specific figure.

“It is difficult to give report on how much has been recovered from fight against corruption,” he said.

He also admitted that the commission is not perfect, but said the agency will always strive to do its best.

“We do not claim to have a monopoly of knowledge in the fight against corruption,” he said.

“There is corruption everywhere, even in the EFCC, but we are doing our best to check it.”

The screening is ongoing.

Ayodele Fayose, governor of Ekiti, is having a long-running battle with the EFCC.
at 05:52
Email ThisBlogThis!Share to TwitterShare to FacebookShare to Pinterest