While Apostle Sulieman preached, did “miracle” in the day time at night he took ‘much needed rest’ in ‘my bosom’ – Otobo 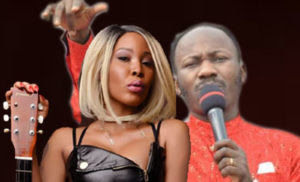 Canada-based Nigerian, Miss Stephanie Otobo has filed a petition against Apostle Sulieman Jonhson just as she dared the police to probe all the allegation concerning her raunchy relationship with the General Overseer of Omega Fire Ministry Worldwide.

In her petition titled ‘Petition Against Apostle Johnson Suleman For Illegal Procurement Of Abortion, Threat To Life And Attempted Murder’ Otobo enjoined the police to probe him considering all text messages from the networks and do forensic analysis of all the nude pictures they both shared and ascertain if photo-shopped.

She further enjoined the police to use her and his international passports to confirm the dates and times of their travels, the hostels they slept both in and out of Nigeria and bank accounts to confirm the transfers of funds.

She also said that in 2015 she was invited by Apostle Suleman to join him for his journey to Napoli in Italy during one of his crusade but while he preached and do “miracle” in the day time at night he took ‘much needed rest’ in ‘her bosom’ and that after the Napoli experience, she discovered that she was pregnant for Apostle Suleman.

She further said that she called him to inform him of the pregnancy but he was not particularly excited about the news rather he requested that she should come to Nigeria.

Otobo while speaking in TV Continental on Wednesday said ‘I think things didn’t go according to his plan because God is God. Nobody can be God. When there is God. The day I was talking to him recently, he was like, ‘Did I put a gun on my forehead to sleep with me”?

I am just fighting for my right because he did it, He must have done this to women and gotten away with it. He needs to ask for his own mercy because he did it. If he keeps denying it, God will expose him and I know that. I want a public apology for all this humiliation’. she said.

“I want the police to check on the issue when he gave me substance to drink and that almost cost me my life, this was one of the main reasons that really caused all of this.”

“We make bold to say that when criminal investigations commence, all these text messages and pictures would be subjected to serious forensic analysis, and the truth would be established,” said a statement released by the firm.

“The hotels they slept in and the evidence of their meetings in and out of this country would be revealed. The pitiable excuse of “photoshop” has become a convenient escape route for all culprits caught on tape these days.” they said.

Monday, March 13, 2017
The Commissioner of Police,
The Nigeria Police Force, Lagos State Police Command, Ikeja, Lagos
State.
Dear Sir, PETITION AGAINST APOSTLE JOHNSON SULEMAN FOR ILLEGAL PROCUREMENT OF ABORTION, THREAT TO LIFE AND ATTEMPTED MURDER Sir, my name is Miss Stephanie Otobo, and I wish to bring a formal complaint to you against one Apostle Johnson Suleman as follows: That sometime in June 2015, Apostle Suleman Johnson and I started an amorous relationship in far away Canada. The relationship was nurtured by Apostle Suleman who inundated me with cast gifts and pleasure trips all over Europe.
In particular, I was invited by Apostle Suleman to join him for his crusade that was held in 2015 at Napoli, Italy, the full expenses for the trip was paid for by the gentleman. While in Napoli, Apostle Suleman would preach and do “miracle”in the day time and take the much needed rest in my bosom at night.
Napoli was our love nest for three (3) good days and after the crusade Apostle Suleman left Napoli and I also returned to Canada. Shortly after the Napoli experience, I discovered that I was pregnant for Apostle Suleman. I called my lover to inform him of the pregnancy but Apostle Suleman was not particularly excited about the news rather he requested that I should come to Nigeria.
Unfortunately Apostle Suleman did not stop at procuring abortion for me without my consent but also in a desperate bid to keep the amorous relationship between him and I a secret not known to his teeming followers, Apostle Suleman invented various devices to bully and threaten my life.
It is against this backdrop that I urge you to use your good offices to call for a thorough and dispassionate investigation into the above allegations. I plead with you, in the course of your investigation, to confirm the exchange of all our text messages from the networks, forensic analysis of all the nude pictures we bot sent to ourselves (and whether they are, indeed, photo-shopped or authentic), our international passports to confirm the dates and times of our travels, investigation concerning the hostels we slept together both in and out of Nigeria and bank accounts to confirm the transfers of funds.
Thank you.
Yours faithfully,

MISS. STEPHANIE OTOBO”
at 02:56
Email ThisBlogThis!Share to TwitterShare to FacebookShare to Pinterest